Why it is important to stop using single use plastic

Please read the article “What is plastic and microplastic”

Every piece of plastic that has been created is still on the Earth today.

People around the world are consuming about 5 grams of microplastic a week, according to new research from the University of Newcastle, Australia commissioned by the World Wildlife Fund. That’s more than 250 grams a year – equivalent to a small plastic jar for every person.

Most was consumed through water, including both bottled and tap. Of the consumables studied, the highest volume of plastic was found in shellfish, honey, beer and salt.

“We’ve known for years that plastics are in our air, ocean and soil.

Microplastics are contaminating the
fruit and vegetables we eat, according to two separate scientific studies published this week. According to the first peer-reviewed study by University of Catania scientist Margherita Ferrante,
apples are the most contaminated fruit while carrots are the vegetables most affected. Published this week in the journal Environmental Research, the report calls for an urgent review of the effects of microplastics on human health.

A second peer-reviewed study out this week will reveal plastic is being sucked up with water through the root systems of food crops. The study was performed jointly by Dr. Lianzhen Li of the Yanthai Institute of Coastal Zone Research in China and Professor Willie Peijnenburg from Leiden University in the Netherlands and is to be published in the journal Nature Sustainability.

Professor Peijnenburg found microplastics are penetrating the roots of lettuce and wheat plants, after which they are transported to the edible above-ground plant parts.

With root vegetables such as carrots, radishes, turnips, and leafy vegetables like lettuce found to be most at risk of microplastic contamination. Campaigners believe these new findings cast serious doubts over the safety of the food we eat.

Microplastics have been found in both indoor and outdoor air. However, the concentration in indoor air is higher than outdoors, according to research presented in 2018 by École Nationales des Ponts et Chaussées.

Research shows that many of the microplastics in our bodies come from the air we breathe – not just from drinking water or eating food. Due to their small size, microplastics can be inhaled and may induce a wide range of diseases including respiratory and cardiovascular diseases, as well as cancer.

More than 300 million tons of plastic are produced each year. Half of that plastic becomes trash in less than a year.

Microplastic contamination has been found in tap water in countries around the world. Overall, 83% of the samples were contaminated with plastic fibres. 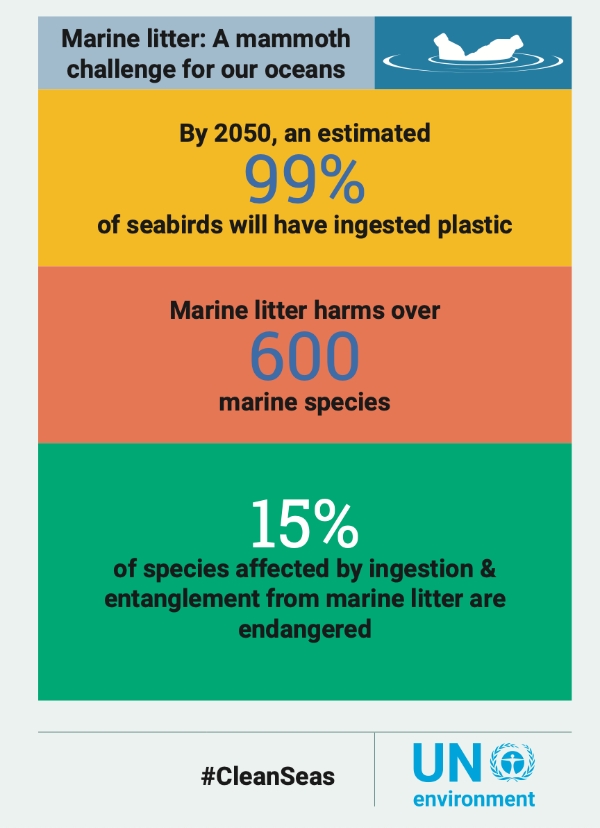 At least 10% of the 100 million tons of plastic we use every year end up in the oceans. This is equivalent to the weight of 700 billion plastic bottles. Put on top of each other these bottles would reach further than the sun. Ocean currents have created several gigantic “plastic soups” around the world. No-one knows the size of these, but they could cover up to 16 million km2, or the combined size of Europe, India and Mexico. The plastic soup has been growing 10 times in size every decade since the 1950s. At this speed, the plastic grows as much as 8 football fields every second. The plastic soup consists mainly of plastic bottles and caps and above all, plastic bags. In the plastic soup there are 60 pounds of surface plastic to every one pound of plankton. Info from worldoceansday.org 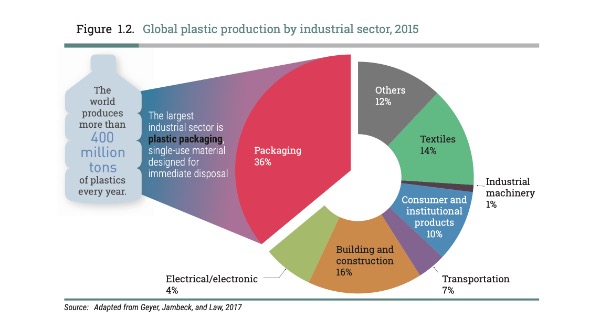 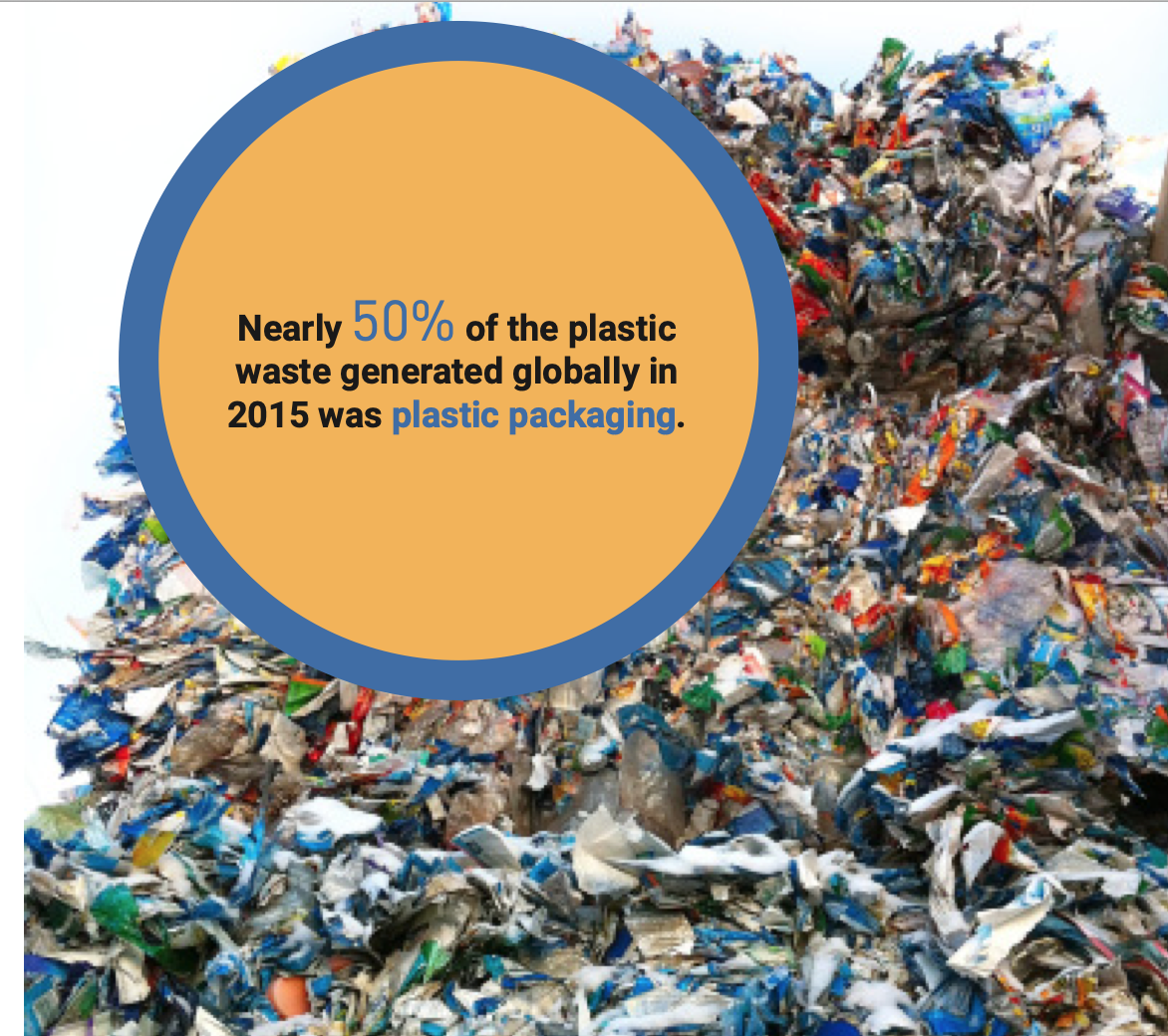 Plastics do not rust or corrode. Most plastics do not biodegrade, but instead photodegrade, meaning that they slowly break down into small fragments known as microplastics. The fragmentation of large plastic items into microplastics is common on land such as beaches because of high UV irradiation and abrasion by waves, while the degradation process is much slower in the ocean due to cooler temperatures and reduced UV exposure.

If the growth in plastic production continues at the current rate, by 2050 the plastic industry may account for 20% of the world’s total oil consumption.

More than one-fourth of the resins globally used in the production of single-use plastics are manufactured in Northeast Asia. This is followed by North America, the Middle East and Europe

Global consumption of plastic can be estimated by observing the amount of plastic waste produced. Plastic packaging is mostly single-use, especially in business-to-consumer applications, and a majority of it is discarded the same year it is produced. 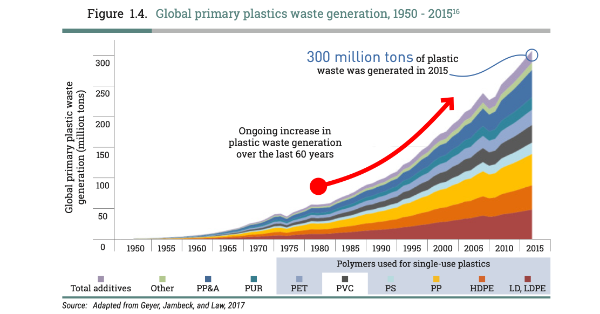 At the end of its lifetime, a product or packaging is recycled, incinerated, landfilled, dumped in uncontrolled sites, or littered in the environment. According to recent estimates, 79% of the plastic waste ever produced now sits in landfills, dumps or in the environment, while about 12% has been incinerated and only 9% has been recycled. 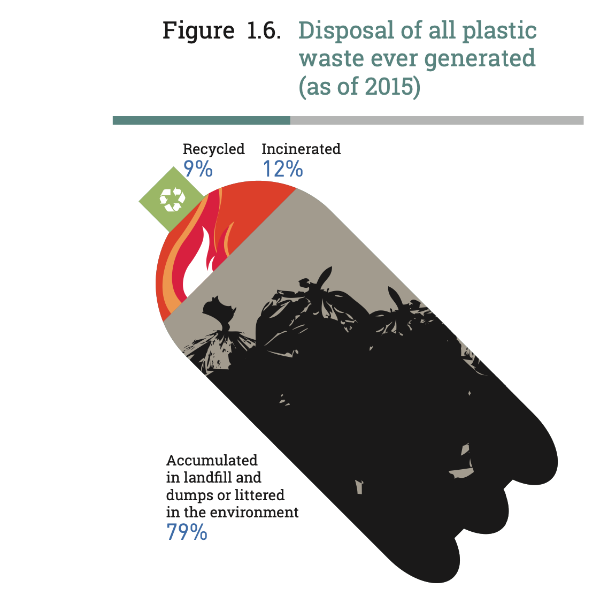 If current consumption patterns and waste management practices do not improve, by 2050 there will be about 12 billion tons of plastic litter in landfills and the natural environment.

According to a recent report, the most common finds during international coastal cleanups are, in order of magnitude, cigarette butts, plastic beverage bottles, plastic bottle caps, food wrappers, plastic grocery bags, plastic lids, straws and stirrers, glass beverage bottles, other kinds of plastic bags, and foam take-away containers. Single-use plastics took most of the spots in this Top Ten and it is not hard to imagine the rankings for waste found inland would be similar.

To reduce plastic pollution, action should be taken in line with the waste management hierarchy and the circular economy approach, to minimise plastic waste generation first of all, improve the state of solid waste collection services, strengthen the recycling industry and ensure safe disposal of waste to controlled landfills. 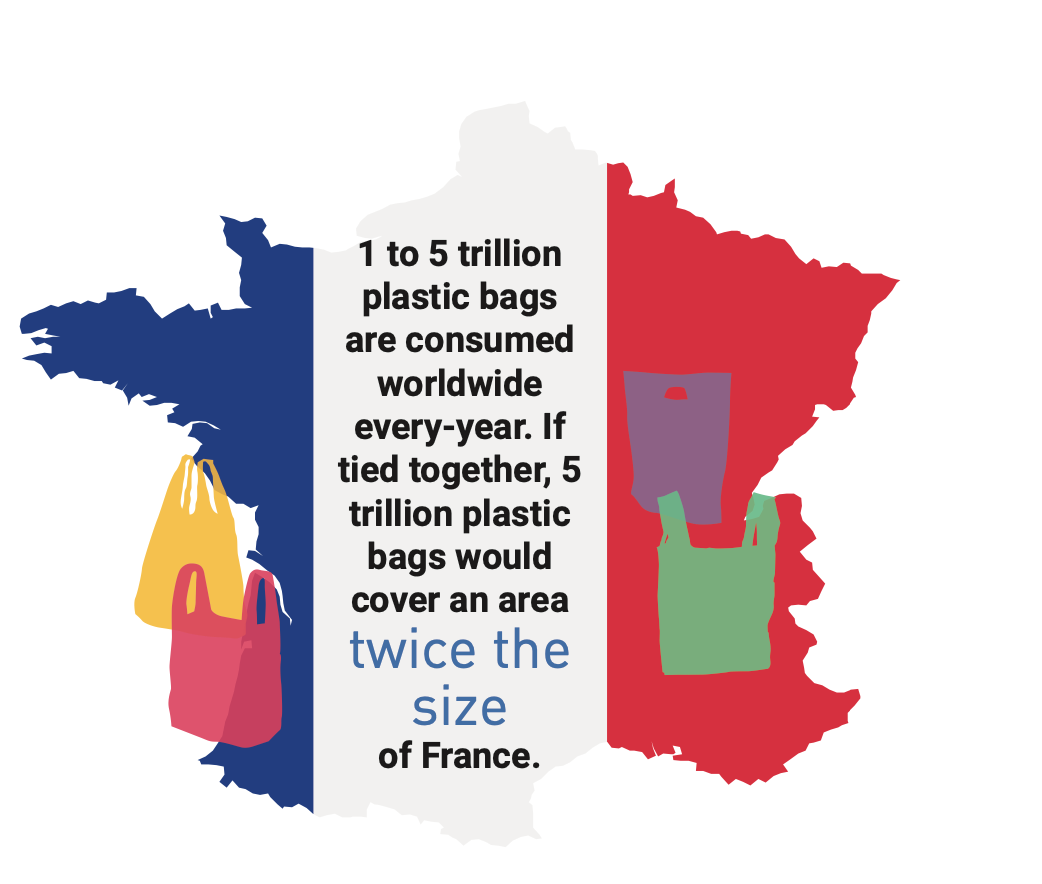 Some studies suggest that plastic bags and Styrofoam containers can take up to thousands of years to decompose, contaminating soil and water, and posing significant ingestion, choking and entanglement hazards to wildlife on land and in the ocean. Due to their light weight and balloon-shaped design, plastic bags are easily blown in the air, eventually ending up on land and in the ocean.

Plastics in the environment pose significant hazards to wildlife both on land and in the ocean. High concentrations of plastic materials, particularly plastic bags, have been found blocking the breathing passages and stomachs of hundreds of different species. Plastic bags in the ocean resemble jellyfish and are often ingested by turtles and dolphins who mistake them for food. There is emerging evidence that the toxic chemicals added during the manufacturing process transfer from the ingested plastic into the animals’ tissues, eventually entering the food chain for humans as well. When plastic breaks down into microplastic particles, it becomes even more difficult to detect and remove from the open oceans. Therefore, the most effective mitigation strategy is to reduce their input.

Styrofoam products, due to their low density and light weight - like plastic bags - can be blown away by the wind. They can float in water and break down into smaller pieces that are highly toxic if ingested.

According to 2015 estimates, 16 of the top 20 countries contributing to marine plastic litter are middle-income countries, whose economic growth is outpacing waste management infrastructure development.

Often “biodegradable” plastic items (including single-use plastic bags and containers) break down completely only if exposed to prolonged high temperatures above 50°C (122°F). Such conditions are met in incineration plants, but very rarely in the environment. Therefore, even bioplastics derived from renewable sources (such as corn starch, cassava roots, or sugarcane) or from bacterial fermentation of sugar or lipids (PHA) do not automatically degrade in the environment and especially not in the ocean.

Styrofoam items contain toxic chemicals such as styrene and benzene. Both are considered carcinogenic and can lead to additional health complications, including adverse effects on the nervous, respiratory and reproductive systems, and possibly on the kidneys and liver. Several studies have shown that the toxins in Styrofoam containers can transfer to food and drinks, and this risk seems to be accentuated when people reheat the food while still in the container. In low-income regions, domestic waste - including plastics - is often burnt for heating and/or cooking purposes, exposing largely women and children to prolonged toxic emissions. Illegal disposal practices of plastics often take the form of open burning, accentuating the release of toxic gases that include furans and dioxins.

In developing countries with inadequate solid waste management regulations, plastic bag litter can aggravate pandemics. By blocking sewage systems and providing breeding grounds for mosquitoes and other pests, plastic bags can raise the risk of transmission of vector-borne diseases such as malaria.

As previously mentioned, plastic waste and microplastics, if ingested by fish or other marine life, can enter our food chain. Microplastics have already been found in common table salt and in both tap and bottled water. Although in recent years research on the effects of microplastics has been growing, still little is known about the exact impacts on human health.

Styrofoam products present challenging recovery dynamics, making recycling – although technically possible – often financially unviable. For instance, Styrofoam usually can't be recycled locally but must instead be transported to a centralised plant. In addition, 95% of Styrofoam is air, making it not cost-effective to store or ship for recycling purposes. Because of the porosity of foamed plastic products, cleaning such products, which are often contaminated with food or drinks, is difficult and energy-intensive, further increasing the cost of recycling.

Finally, the future costs of removing all single-use plastics accumulating in the environment is estimated as higher than the costs of preventing littering today. In Europe alone, the estimated costs for cleaning shores and beaches reach €630 million per year,45 and studies suggest that the annual economic damage plastics impart on the world marine ecosystem is at least $13 billion. 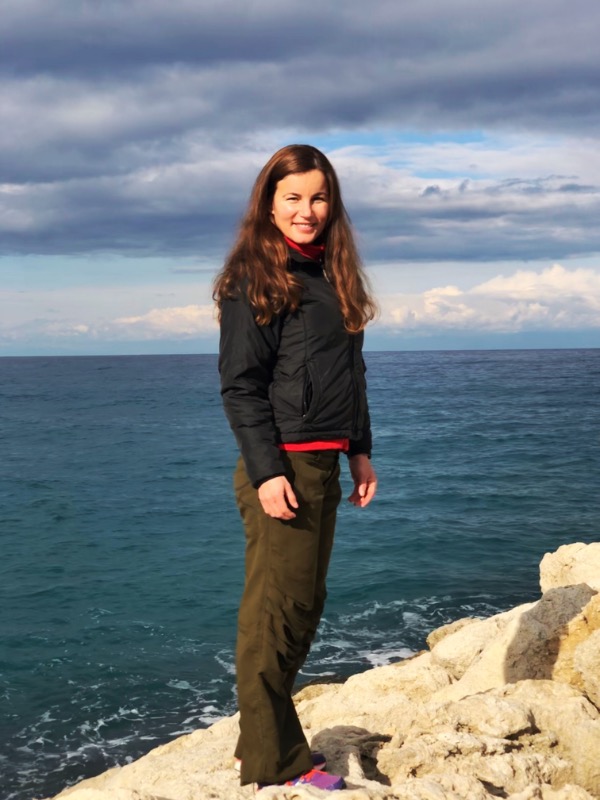 What is plastic and microplastic 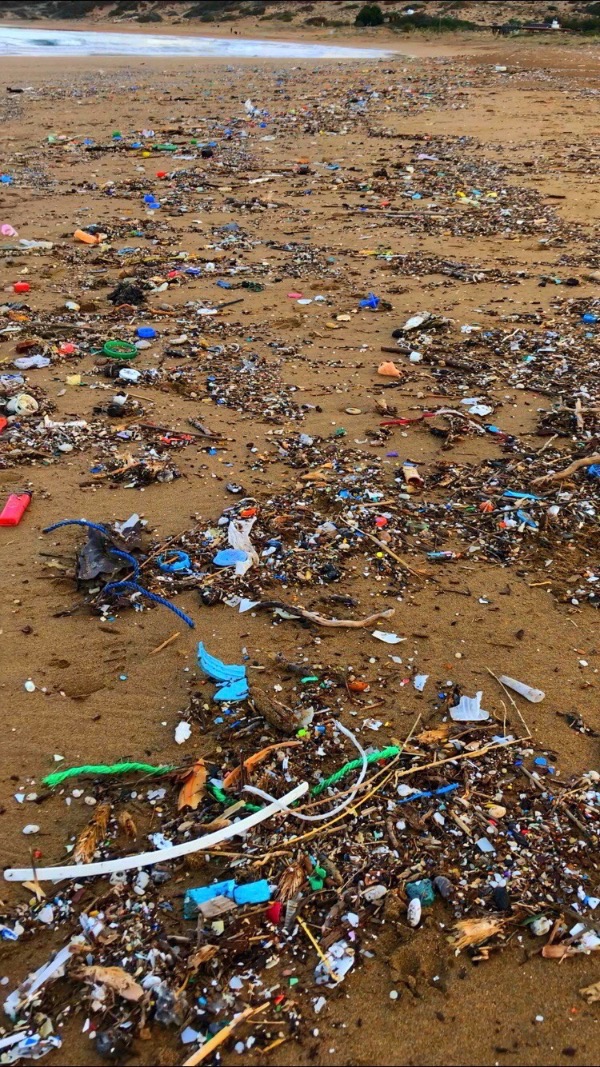 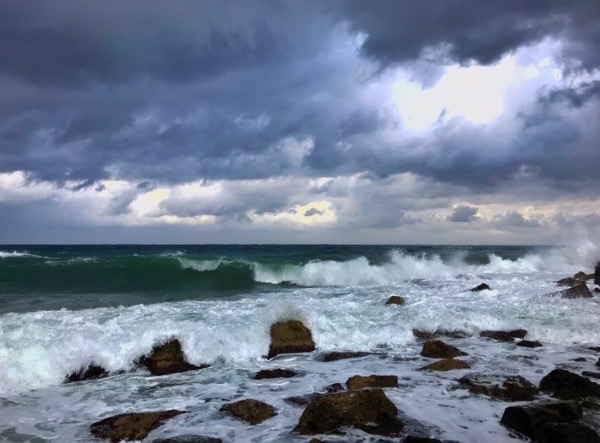 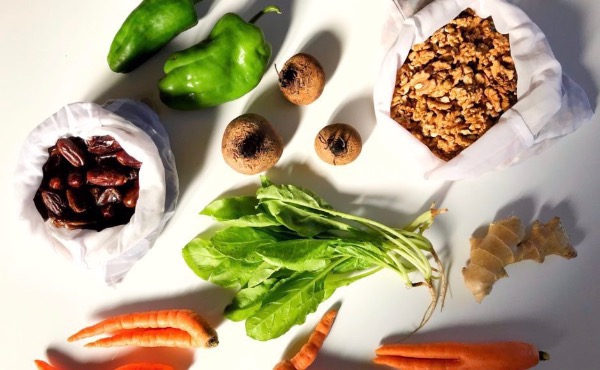 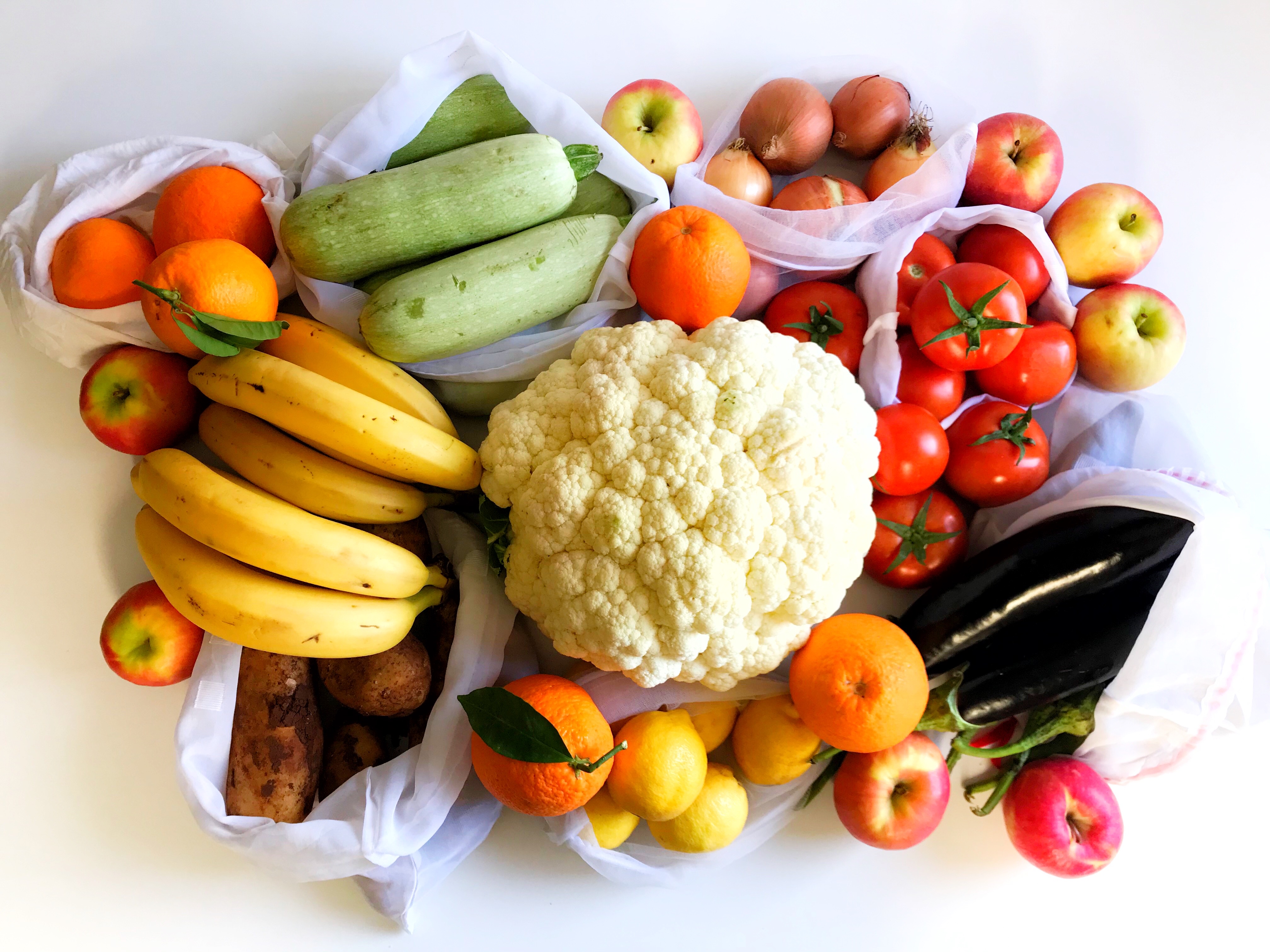 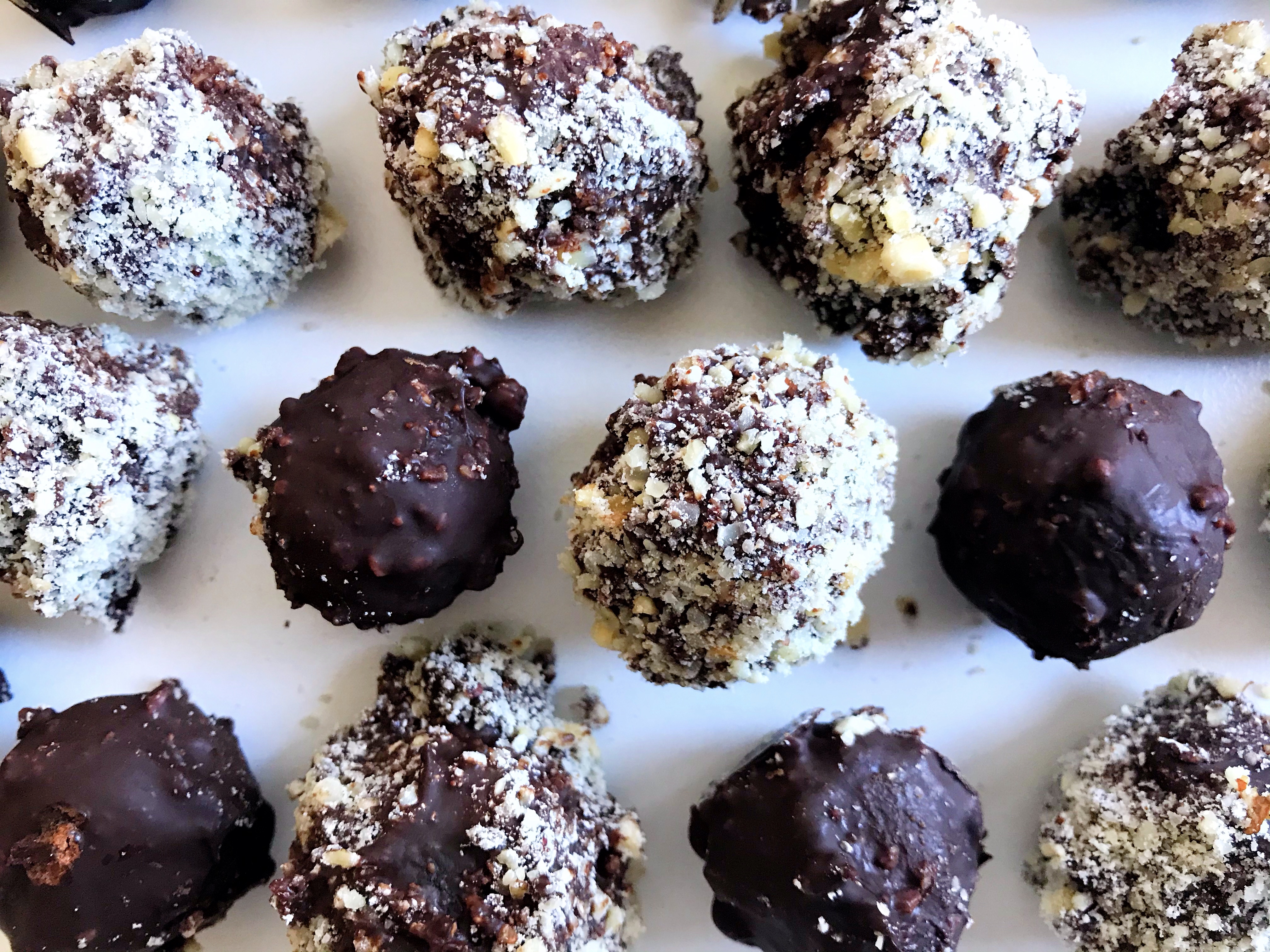 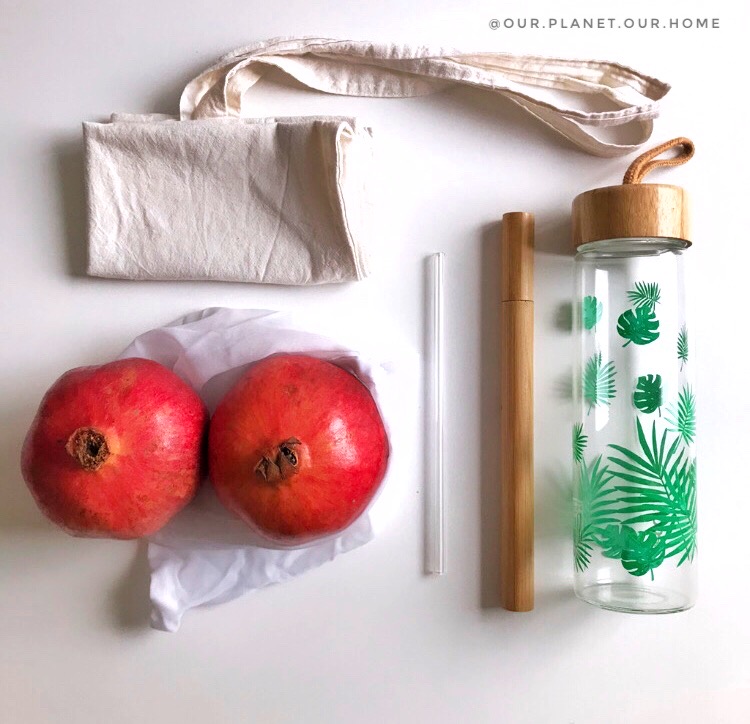